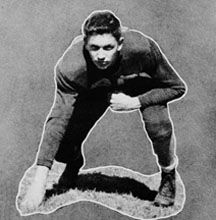 He played football almost sixty years ago, in the days when the helmet was made of leather, the facemask did not exist, and men like George Halas, Frank Leahy, and Bud Wilkinson still prowled the sidelines. The game, however, was still the same. Blocking and tackling. Speed and power. Hit or be hit. Tough-minded, aggressive, and supremely competitive, Richard N. Sweeny ruled Catholic League line play on both sides of the football. A two-year, two-way tackle, he coupled superior quickness and textbook technique with an unrivaled determination to dominate his opponent's line of scrimmage. When the Ramblers needed a tough first down, they ran behind Sweeny. Meanwhile, opposing coaches and their running backs avoided him at all costs. A driven, intense battler, Dick was a warrior in the trenches, one who brought a very physical style of play to the Rambler effort. He anchored both offense and defense with an unfaltering excellence, and along the way, earned recognition as one of the finest players in the Catholic League and in the Chicago area. Bolstered by Dick's dominating play on both the offensive and defensive line, Loyola racked up a 7-0 record, rolling up 243 points to their opponents 31. He led the Ramblers to the 1947 North Section championship game against Fenwick, who carried on identical 7-0 record. In front of 10,000 fans jammed into Loyola Stadium, the Ramblers took the Section crown with a 20-13 victory. Though Loyola would fall, 19-0, in the title game, their 8-1 record would place them among the finest teams in Academy history. At the conclusion of the 1947 season, Dick was named to the All-Catholic First Team and All-City teams, and represented Loyola in the Catholic League All-Star game in August of 1948. Upon his graduation from Dumbach Hall, Dick took his game to the College of the Holy Cross. There he again excelled as a two-way tackle, highlighted by his selection to the Colliers Magazine Freshman All-American team. He earned his Bachelor of Science degree from Holy Cross in 1952 before moving on to graduate work in economics at Boston College and Harvard.
Back