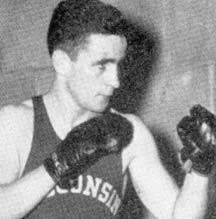 One of the fiercest competitors ever to wear a Loyola uniform, Harold W. Sullivan was one of the dominant boxers on one of the strongest teams in Midwest high school boxing in the early 1940s. Remarkably, in his four years on the Loyola boxing team, Harold never lost a bout. His undefeated career propelled the Ramblers to a record of sixteen matches won and four lost, and, although there was no official league at the time, based on their overall record, the Rambler boxers claimed State championships in 1941, 1942, and 1943. This success has to be credited to the boxer who never left the ring a loser: Harold Sullivan. As captain his senior year, Harold won all five of his bouts and led the team that was thought to be the best in the Midwest. Harold also excelled in other sports. He played on the football team for three years, quarterbacking in 1943. His 80 yard touchdown run in the DePaul game is still remembered by those in attendance at the game. Harold also ran on the track team. His versatility and competitiveness made him one of Loyola's premier athletes, and although boxing is no longer a sport at Loyola, Harold Sullivan's legacy lives on. After graduation from Loyola, Harold attended Loyola University, and then DePaul Law School. His long legal career took him to the bench, and, ultimately, to Chief Magistrate of the Circuit Court of Cook County.
Back