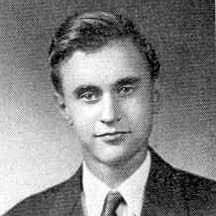 The owner of blazing court speed and a punishing forehand, Raymond J. Smith reigned supreme over Catholic League tennis in the post-World War II period. At 6'1" and only 118 pounds, Ray did not overpower his opponents. His was a game of intelligence and single-minded concentration. Lacking a dominant serve and possessing only an adequate backhand, Ray won with defense, a rifle forehand, and a defiant determination to win. Most important, he was at his best in the clutch, a quality that served him well in an accomplished career at Loyola, Notre Dame, and beyond. Ray launched his tournament career as a thirteen-year-old in the summer of 1945, during the waning days of the Second World War. His runner-up finish in that national junior tournament sent him brimming with confidence to Loyola and the Catholic League, where his record can be summed up in a single word: perfect. Between 1946 and 1949, he never lost a match, leading the Academy to four undefeated seasons while rolling to four straight individual Catholic League titles. He continued to compete in junior tournaments maintaining a top-five state ranking for his age group. After graduation from Loyola, Ray moved on to the University of Notre Dame, where he earned three varsity letters playing both singles and doubles. He qualified for the NCAA tournament in all three of his varsity seasons, once advancing to the round of 32. In his final collegiate campaign, he was honored with the captaincy of the Fighting Irish squad of 1953. After college, he continued to compete at the highest levels, his post-collegiate resume including stops at Wimbledon, the Italian Open, the Spanish Open, the French Open, the Monte Carlo Open, the All-Army doubles finals, the Western Open doubles finals, and the National Clay Courts. Armed with a B.A. from Notre Dame, Ray entered Northwestern Law School, earning his degree in 1956. He has since served as First Lieutenant Army Judge Advocate, Assistant United States Attorney, and Federal Defender.
Back