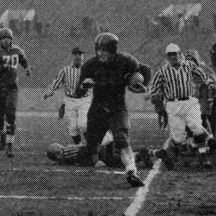 He grew up in the shadow of Loyola's football stadium, hard by the lake on Albion Avenue in Rogers Park. Like many other neighborhood boys, he dreamed of someday playing halfback for the Maroon and Gold. In the season of 1947, he finally got his chance, and he made the most of it. That year, senior co-captain Michael A. Ryan was an offensive juggernaut, leading the Ramblers in rushing and scoring as they raced to an undefeated regular season, a North Section title, and a berth in the city championship game. A hard-nosed ball carrier who coupled speed with gritty toughness, Mike dominated the Rambler offensive attack, racking up yards and points both inside and outside. Punishing up the middle and dazzling in the open field, he shredded opposing defenses on the way to scoring 84 points in nine games. He scored at least once in each regular-season game, including jaunts of 26, 55, 56 yards. Years later his coach, Bob Batchelor, called him the hardest runner he ever saw in high school football. Mike excelled in the defensive backfield as well. His fondest football memory came from the pivotal clash with highly-favored Fenwick in the regular-season finale. Late in the game, the Ramblers and Fenwick were tied at 13-13, but Fenwick was driving. With a minute to play and the title on the line, Mike intercepted a pass and returned it 52 yards to the twelve-yard line. With Loyola then on offense, Mike caught a ten-yard pass to the one, and on the next play plowed into the end zone for the winning score to clinch the North Section title, Loyola's first in fourteen years. After graduation from the Academy, Mike went on to play football at the University of Minnesota. In his sophomore year, with the war in Korea in its early stages, Mike left Minnesota to join the Marine Corps. After completing his hitch in the Marines, Mike married and with his wife, Helen, settled in California where they raised six childrenÑLisa, Virginia, Tony, Dan, Kelly, and Michelle. Over the ensuing years, Mike enjoyed a successful career in sales and marketing.
Back