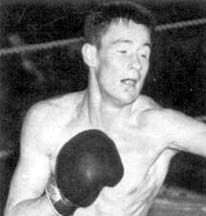 You can't have a legitimate Athletic Hall of Fame without Willie Roche. So wrote nine of William G. Roche's classmates and teammates urging his selection. A talented, versatile athlete, Willie established himself in the mid-40's as a stalwart on the gridiron and in the ring. Willie's sporting passion was football. A four-year player and a senior co-captain, Willie was one of the few impact players on Rambler squads that hovered around .500. A player of fighting heart and power, this bruising fullback and defense man was, by his senior season, Loyola's outstanding player and one of the league's and city's best. (Willie's coach was John "Hicks" Connelly (Hall of Fame, 1998) whose last season as coach was also Willie's last as a player. Willie today calls him the "most dedicated and conscientious gentleman I had ever known.") Willie's outstanding senior season was highlighted by a three-touchdown performance in a rout of St. Patrick's and a 75-yard scoring romp through the mud and the St. Ignatius defense. As accomplished as Willie was on the gridiron, he was perhaps even better in the ring. The one-on-one, mano a mano nature of boxing, where "you can't alibi a defeat," appealed to him and fueled his success. Senior co-captain on a team in which he was clearly the outstanding fighter, Willie went undefeated his senior season. In fact, more remarkable still, in his entire four-year high school boxing career, Willie never lost a bout against another school or athletic club. The lone blemish to his record occurred outside his Loyola career when he lost a decision in finals of the North Side Division of the Golden Gloves. With a career like Willie's, no alibis were necessary. Willie also excelled in track, where he lettered three years. He was a threat in multiple events, including relays, hurdles, and even the shot put. He recalls the difficulty in training for track, and remembers the loneliness of practices was akin to "a religious experience. You knew it was good for you, but the price was high." Willie's dream was to play college football (his brothers after him played at Northwestern), but in the final game of his senior year a knee injury cut short that dream. Instead, Willie enrolled in Loyola University, going to night classes while working days. After graduation in 1951, Willie began a two-year stint in the Army. He served two years in Japan, where his boxing skills came in handy. He boxed on and helped coach his unit's team, and true to form, was undefeated in six bouts. Upon his return to civilian life, Willie began a thirty-five year sales and marketing career with the U.S. Gypsum Company.
Back