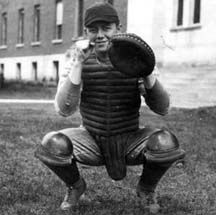 Hall of Fame shortstop Freddy Lindstrom (Hall of Fame, 1985), Loyola class of '22 and Cooperstown class of 76, called teammate Lawrence J. O'Connell the best catcher he ever played with, major leagues included. This tribute from one of baseball's greatest players speaks volumes of the athletic merits of a ball player who eighty years ago was preparing for his senior campaign, the great success of which would bring him collegiate offers as well as a contract with a big league club. Playing in the Golden Age of Sport, Larry proved a formidable presence as a three-year starter behind the plate for the Rambler nine. Steady, solid as a rock, adept at working his pitchers, intimidating to batters and baserunners alike -- Larry anchored Loyola's defense. He played to win. Umpires were apparently not happy with his playing style: his teammates called him "Roadblock" because nobody went untouched at home plate even when Larry didn't have the ball. Larry and teammate Fred Lindstrom led the Ramblers to undefeated seasons in 1921 and 1922, culminating in the 1922 City of Chicago Championship victory over Lakeview H.S. Larry was named All-City and All-State at the end of his senior season when the major leagues came calling, with the New York Giants offering Larry and Freddie contracts for the summer season. Fred Lindstrom accepted, and his subsequent exploits earned him a spot in Cooperstown. Larry's father, however, would not budge from his decision to send Larry to college. Larry accepted a four-year scholarship to Campion College, where he was the starting catcher in 1923 and 24. When Campion closed in 1924, Larry traveled to Ann Arbor to attend the University of Michigan, where he starred as the starting catcher in 1925-26. He earned a combined AB Law degree from Michigan in 1928, and a J.J.D. from Northwestern in 1929. After a brief coaching stint at Northwestern, he served as Governor Henry Horner's Chicago campaign manager in 1933 and again in 1937. Larry was appointed Chief Securities Examiner for the State Industrial Commission from 1933 to 1940. He retired from the automobile industry in 1965, and died on Christmas Day, 1975.
Back