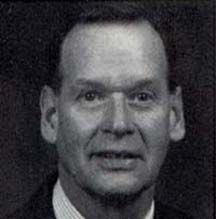 Ken Mizerny was truly one of the great players in Loyola basketball history and went on to an impressive collegiate career. Ken played Rambler basketball for four years, the first year with the lightweights and the last three with the heavyweights. Always a solid performer at both the offensive and defensive end, he enjoyed a brilliant senior season. He captained his team in senior year and set a single game scoring record of 47 points against Gordon Tech. Ken was named to the Chicago Catholic League All-Star team in 1956. Ken continued his basketball career at the University of South Dakota where he played for the Small College NCAA Champions in the 1957-58 season. He was named to the All North Central Conference team in his junior and senior seasons. His senior season saw Ken being voted MVP of his college team and honorable mention Little All-American. Ken was recently elected to the University of South Dakota's Hall of Fame.
Back