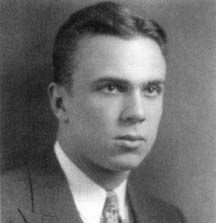 The Loyola football team of 1933 was an historic team, certainly worthy to take its place alongside the six or eight truly great teams in Loyola's ninety-two years of football. With a record of 8-0-2, Coach Lenny Sachs (Hall of Fame, 1985) and his Ramblers took the Catholic League championship, Sachs' last championship team and Loyola's last for the next thirty-two years. The 1933 team was led by Jack McCarthy (Hall of Fame, 1985), an All-Catholic League and All-State halfback. At his side, stood a feisty, Irish fullback - James R. McSheehy. Jim McSheehy was an aggressive blocker and a tough, two-fisted runner. He had excellent speed and balance, and combined with McCarthy to provide a devastating one-two, inside-outside punch, another Blanchard and Davis. Jim was the leading scorer on that championship team with ten touchdowns and three points after. His 63 points more than doubled Loyola's opponents that season, as the defense only allowed 30 points that season. A hard-hitting linebacker, Jim was one of the leaders on that defense, a sure tackler and a steadying influence. At season's end, he was honored with a selection to the First Team All-Catholic squad. Jim's speed helped him on the cinders as well, where he competed as Loyola's and one of the league's top sprinters. Upon graduation from Loyola, Jim entered Purdue University to pursue a degree in engineering. He played a year of football before a shoulder injury prematurely ended his career. When war came, Jim put his engineering degree to good use in the Navy. He was stationed at the Boston Navy Shipyard, coordinating ship repairs for Navy vessels. After the war ended, he returned to Chicago, his family, and his work. He started a company, American Cleaning Equipment Corporation, and developed and expanded the business over the years. A man of kindness, intelligence, generosity, and great humor, Jim died in 1971.
Back