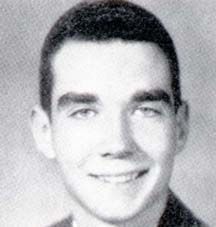 First as a championship player and then as a Hall of Fame coach, Michael C. McConville distinguished himself as one of the giants of Illinois tennis. Mike enjoyed a sterling competitive career. While at Loyola, Mike was the dominant tennis player in the Chicago Catholic League, capturing the individual title three years running from 1953 to 1955. He captained the team as a senior. After graduation from the Academy in 1955, Mike entered Xavier University in Cincinnati, and there he played four years of varsity collegiate tennis. During his junior and senior seasons, he rose to number one singles and doubles while captaining the team. Mike remained close to the competitive game when he became the head coach at Barrington High School in 1968. There he launched one of the most successful careers in Illinois high school coaching. For 25 years, Mike's teams dominated tennis in the northwest area. The record of accomplishment speaks volumes: his teams won the Mid-Suburban Conference title 19 times, including a remarkable stretch of 16 titles in a row. His teams captured 16 straight State Sectional championships, finished five times in the state tournament's top ten, and placed second in the State one time. Mike's 352 dual meet victories ranks him 17th on the all-time list of Illinois coaches. In recognition of his achievements, Mike was twice selected Illinois Coach of the Year by his peers. In 1989, he was nominated for National Coach of the Year. He is a member of the Illinois Tennis Coaches Hall of Fame.
Back