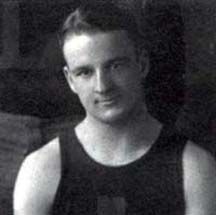 Jim Martin was one of the great all-around athletes from the Academy's earliest days, on the eve of the First World War. He played ball at a time when football was played without a helmet, basketball was played in a "cage," and baseball was played with homemade mitts. Jim earned an amazing twelve letters in football, basketball and baseball during his career at Loyola. In his senior year, he captained all three teams. He was quite an athlete, capable of making the big play. He once drop-kicked a 53-yard field goal to provide the winning margin over Great Lakes in his senior year. After graduation from the Academy, he played football one year at the University of Illinois before joining the Army to fight the Great War. When he returned, Judge Jerome Dunne, a close friend (and Hall of Famer), helped him get a job playing professional football. He was the featured running back and kicker for two years with the Ft. Wayne Flyers in a league that was a precursor to the NFL. Twice his club played against a team from Ohio, the Canton Bulldogs, whose star was the legendary Jim Thorpe. For many years after, Jim recalled to his son that Thorpe was the toughest opponent he ever played against, and that it was an honor to be on the same field. "Jimmy," as he was called by everyone, was the CEO of Shoreline Marine Company from 1938 to 1975.
Back