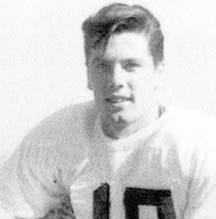 Possessing a unique combination of agility, speed, and heart, Patrick M. Mahoney was a mainstay on the Loyola gridion for three years as a two-way end and a kicker. The leadership qualities he displayed then both on and off the field have helped shape the 35 years of dedicated service he has since given to high school students and athletes. His lack of giant size easily offset by great quickness and feisty aggressiveness, Pat was a stalwart at both offensive and defensive end. He also handled all facets of the kicking game. His pass receiving and kicking made him Loyola's top scorer, and he vied for the Catholic League scoring title until an injury sidelined him for the season finale, pushing him to second. His fine play on both sides of the ball earned him All-Catholic League selections after both his junior and senior seasons. Captain of the 1955 playoff team, Pat's football career at Loyola culminated in his being honored as the prestigious Skoglund Award winner. Pat was a good all-around athlete, running track (3rd in the Catholic League half-mile run) and playing baseball and basketball. An excellent student and Air Force Academy appointee, Pat went on to Vanderbilt University on a football scholarship. There he played both football and baseball while earning his B.A. in history, and then followed with a master's degree in education from Loyola University. Thereafter Pat began a legendary 35 years as teacher, coach, and dean of students (30 years) at St. Viator H.S. in Arlington Heights. Mahoney stories abound among Viator alums and he has long since become a beloved institution at the school. Athletics have never strayed from his heart. As head baseball coach from 1967-1982, he guided the Lions to seven East Suburban Catholic titles. During those same years, he was the varsity football offensive and defensive line coach for another seven conference championship teams. He also won titles as head sophomore baseball and head freshman football coach. His list of contributions, those heralded and unheralded, to the young people of St. Viator give ample testimony to the distinguished career of this "man for others."
Back