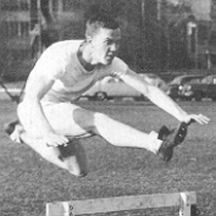 In the critical judgment of many who saw him perform, Richard A. Lahart was the most unheralded athlete in the class of 1955, and one its finest. Fifty years ago, performing on the hard-packed cinder track outside old Dumbach Hall on the grounds of Loyola University, Dick ruled Chicago Catholic League track and field in the 120-yard high hurdles and 180-yard low hurdles, rewriting the record-book while winning nearly every individual hurdle race he entered in four years of competition. A study in athleticism and devotion to his craft, Dick combined speed and unrivalled technique with a disciplined work ethic. He demonstrated his mastery early on when, after going unbeaten as a freshman in the lower division, he moved up to the varsity his sophomore year and claimed the Catholic League low-hurdle title against a veteran field. Having demonstrated so convincingly that he could run with the big boys, Dick never looked back. He took both the low-hurdle and high-hurdle CCL crowns in 1954, adding the mile relay to his resume as well. A year later, as co-captain of the 1955 thinclads, Dick and his Ramblers reigned supreme over the Catholic League, with Dick repeating in record-breaking fashion as low-hurdle and high hurdle champion while leading the mile relay and the medley relay to titles as well. On the strength of his dominating performance, the Ramblers staked their claim to the track and field title of 1955. No other Rambler athlete of his era, in any sport, so insistently exercised his will over his competition as did Dick Lahart. That he did so with characteristic modesty and unassuming grace was no surprise to those who knew him. After graduation, Dick attended Loyola University before launching a career in business. He is the founder and president of TapeCase, Ltd., a marketer of industrial business products.
Back