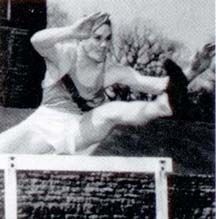 Successful both at the Academy and at the collegiate level, Joseph B. Lahart established a record of accomplishment in track and field which few can approach. Although he collected his first Catholic League championship in the pole vault as a freshman, it was in the hurdles and the sprint relays that Joe made his mark. His championship record is nothing short of remarkable, as he dominated the Catholic League hurdle events for three years running. He claimed the League title in the low hurdles as a sophomore, doubled in the low and high hurdles as a junior, and repeated as high hurdles champion as a senior while establishing a new league record. In addition to his hurdles titles, Joe was an invaluable member of the sprint relay teams. His 880 yard relay team was nearly invincible as was evident in 1947 when Joe and fellow sprinters Harry Jacobs, Chuck Whittingham (Hall of Fame 1998), and Jimmy O'Brien dashed to the Catholic League title and a new league standard. After leaving Dumbach Hall, Joe attended Loras College, where he continued to demonstrate pre-eminence in the hurdle events. Joe claimed Iowa Conference titles in both the low and high hurdles in his junior year of 1950, and repeated in the high hurdles his senior year. Showing his versatility, the senior captain ran with honors in the 100 yard dash and the pole vault as well, and led his 880 yard relay team to a conference crown. Joe was elected to the Loras College Hall of Fame in recognition of his many achievements.
Back