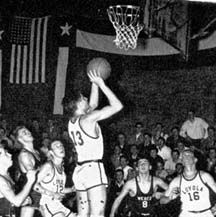 A student of the game and the consummate floor leader, Paul C. Krucker turned a beautiful jump shot, an aggressive style, and a coach's head for the game into Hall of Fame careers at first Loyola Academy and then Loyola University. After starting on the lightweights as a sophomore, Paul soon made his mark on the heavyweights his junior year when he finished sixth in the Catholic League in scoring. His senior season was nothing short of brilliant, as Paul and the great George BonSalle (Hall of Fame, 1999) led Loyola to a win in the prestigious St. George Christmas tournament followed closely by a Catholic League North title. Selections to the St. George All-Tournament team, the North Section All-Star team, and the All-Catholic League team confirmed the obvious Ð Paul Krucker was a player, one of the finest all-around performers in the city of Chicago and the state of Illinois. Upon graduation from the Academy, Paul accepted a four-year basketball scholarship to Loyola University. His adjustment to the next level was seamless as the qualities which had served him so well at the Academy found a home again in Alumni Gym Ð a steely intensity, a willingness to carry the mantle of leadership, a deft shooting touch. Paul was a three-year starter for the Ramblers, captaining the team as its Most Valuable Player during his senior campaign. Induction into the Loyola University Hall of Fame cemented an already proven reputation for superlative play and exceptional leadership on the hardcourt. Paul did three years of active duty in the Marine Corps, reaching the rank of captain.
Back