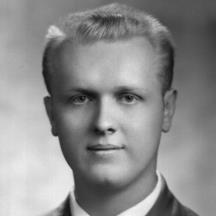 A blonde-haired powerhouse with the touch of a burglar, he was the Golden Boy of Catholic League tennis. Towering over the court at 6'5", long and lean James E. Kemper dominated Chicago Catholic League tennis from 1943 to 1945, claiming three straight singles titles in the waning years of the Second World War with his well- honed serve-and-volley game. A big personality with a warm, engaging smile off the court, Jim became a relentless and stubborn competitor once he stepped inside the lines. His game was as intimidating as his physical presence, and he imposed his will on the opposition with a potent combination of power and finesse. He coupled a rocket serve and a strong baseline game with a deft touch and masterful control around the net. His favorite shot was the "feather," his term for the soft, sharply-angled passing shot just out of reach. Quick for a big man and fundamentally sound, a master tactician rarely out of position, Jim proved a formidable challenge. He took his first CCL title as a sophomore in 1943, and never relinquished it, becoming the first player in league history to ever capture three league crowns. Jim also ruled doubles play, teaming up with Jimmy Evert (Chris Evert's father) to win several city doubles titles. Immediately after graduation from Loyola, Jim enlisted in the Army Air Cops. Upon completion of his service, he attended Northwestern before taking in the task of running the family business, Kemper Knitting Mills. He ran the company until 1966, thereafter devoting the rest of his life to managing tennis clubs in the Chicago and North Shore area. He launched a new business, Kemper's Rocket, and continued his lifelong involvement in youth sports, coaching multiple sports at St. Philip the Apostle in Northfield as well as girl's basketball and softball at Marillac.
Back