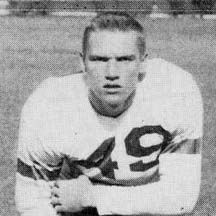 When Father English vowed to rebuild Loyola's football program he turned immediately to Len Jardine. Len had been an All-Catholic Leaguer in both football and basketball during the '50's and was named All-Big Ten at Purdue his senior year. Beginning in 1960, Len Jardine dramatically changed Loyola's football fortunes for the better. (Despite their loss to St. Rita 16-15 in the City Championship.) Len's 1963 squad is considered by many to be the finest team in Loyola Academy history. Len Jardine set the pattern for the '60's, a decade that saw Loyola win 79 games while losing only 15.
Back