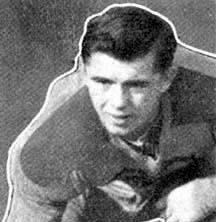 After a fine high school and collegiate playing career, Peter J. Hester embarked on thirty-six-year coaching odyssey that spanned five decades. Along the way, he left an indelible mark on Chicago high school football. Peter was the starting guard on Loyola's 1947 North Section championship team that went 9-1. As a senior, he captained the 1948 team before heading west to play for the University of Idaho, where he was a three-year starter at guard in 1950, 1951, and 1952. His playing days behind him, Peter returned to Chicago to begin his Hall of Fame career in coaching. In his nearly forty years as a head or assistant coach, Pete has been an instrumental part of over 250 victories. Winning seemed to follow Pete wherever he went. He began as an assistant at Loyola before going to St. Pat's, where he was part of a staff that coached 33 games without a loss. Moving on to assist at Lane Tech, his six years there brought two Public League championships and an undefeated season. Having built an outstanding reputation as an assistant coach, Pete was tabbed by Curie High School as its first head coach in 1973. There, he built some very formidable teams. Under Pete's leadership for some twenty seasons, Curie won two Blue-Green City championships and eight West Section championships. He brought his Curie teams to the State playoffs eight times, and had one undefeated season. His overall record was an outstanding 130 wins against 61 losses and 3 ties. Pete's coaching prowess did not go unrecognized. In 1976, he was selected Public League Coach of the Year, and today, he is a member of the Halls of Fame of the Illinois Football Coaches' Association, the Chicago Catholic League, St. Pat's, and McGuire University.
Back