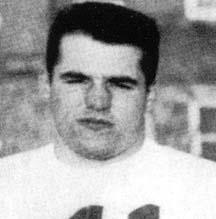 Over the history of Loyola Academy football, T. Michael Herbert ranks as one of its most outstanding linemen. Generally it's the glamour positions, quarterback and running back, that gain attention and recognition for their exploits, but Mike's all-around talent, dedication, and commitment earned him the respect of teammates, opponents, and media. One of only a select few linemen who started for three years, Mike was a two-way performer anchoring both offense and defense. During his career he was a Herald American finalist for Lineman of the Week on four occasions. He has the unique distinction of being the only player in the Academy's history to recover three fumbles in a game on two occasions. His plain toughness and nose for the ball led him to All-Catholic League recognition his senior year. He followed his Academy success with college ball at Northwestern University. Mike went on to a thirty-five-year career as a detective with the Chicago Police Department. After retiring a few years ago, he joined the security unit of the State's Attorney's office. He has kept up his interest in athletics. While still a detective Mike served nine years as athletic director and football coach at St. Margaret Mary Grammar School. He also served as a volunteer football coach at Hales Franciscan and Mather High Schools. For the past ten years, Mike has been a major league baseball scout, first with the New York Mets and presently for the Detroit Tigers. In 1996, Mike was named Baseball Scout of the Year by the Illinois High School Baseball Coaches' Association.
Back