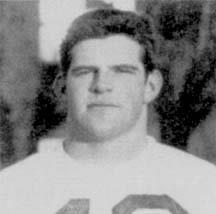 It was the spring of 1960. The telegram from Coach Vince Lombardi asking him if he was interested in playing for the Green Bay Packers was flattering, but Thomas P. Henehan respectfully declined the offer. After a distinguished three-sport career at Loyola and an equally distinguished two-sport career at Holy Cross, Tom had decided his life was leading him in another direction, and he had to answer the call. A tough competitor and a quick learner, Tom was also blessed with speed and agility unusual for on his size. At Loyola he put this gifted athleticism to good use in three different arenas - the gridiron, the shot put ring, and the hardcourt. A two-way starter at defensive end and center/tackle in his junior and senior years, Tom was selected to the All-Catholic League team in 1955 and was subsequently recruited by several colleges. He was perhaps even more impressive as one of the foremost shot-putters in Illinois, shattering the Catholic League record with a toss of 54' 5", a mark that held for many years. Football and track and field proved but two pieces of the Henehan puzzle, for Tom distinguished himself on the basketball court as well. A starting center, he was selected a Catholic League All-Star at the conclusion of his senior season. Tom declined an appointment to the Air Force Academy and instead accepted an athletic scholarship to the College of the Holy Cross. There he started at guard and middle linebacker his final two seasons for coach Eddie Anderson. Following his senior campaign he was selected to the All-New England team and was nominated to the Academic All-American team. Tom continued his track and field career where he left off at the Academy - breaking records. From 1957 to 1959, he broke his own Holy Cross record several times, and set the UMass field house record as well. He captured several prestigious titles, including repeat titles in both the Eastern Intercollegiate Athletic Association Championship and the Connecticut Relays. Co-captain his senior year, Tom was later named by legendary coach Bart Sullivan to the all-time Holy Cross track team. Upon earning his B.A. in history from Holy Cross, Tom forsook both Northwestern Law School and pro football to enter the Maryknoll order renowned for its missionary work abroad. Armed with a masters of Divinity, Tom began his thirty years of ministry to the impoverished nations of Guatemala and Chile. In 1996, he accepted an appointment to the Maryknoll General Council. A study in humility and service, he has acquitted himself nobly.
Back