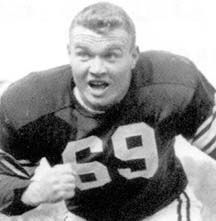 Administrator, teacher, moderator, department chair, coach: after 40-plus years at the same workplace, one tends to wear many hats. William A. Graf is so equipped. With as many as eighteen job descriptions in his resume - none more impressive than his nineteen-year run as Loyola's athletic director - Bill has played a vital part in the life of Loyola and its students. As a linebacker and fullback, Bill was big, quick, and hard-nosed. His leadership qualities were evidenced by his selection as team captain his junior year despite being sidelined by a broken leg. Following a superb 1954 season in which he again captained the team, Bill was named to the All-Catholic North Section team. After graduation from Loyola he entered Marquette on an athletic scholarship and played one year with the then Warriors before a coaching change signalled his switch to Northwestern. Under coaching stalwarts Ara Parseghian, Bo Schembechler, and Alex Agase, Bill capped his 1960 senior season as a small-college All-Star center/linebacker with a trip to the Senior Gem Bowl in Erie, PA. He also was honored with the Leon Kranz Award as NU's Most Outstanding Senior in Physical Education. Bill returned to Loyola to teach and coach, serving as an assistant on the staffs of Len Jardine (Hall of Fame 1985) and Bob Naughton (Hall of Fame 1999). He was instrumental in the 1963 North Section and 1965-1966 Prep Bowl championships before leaving the staff to begin his career as an administrator. He served as dean of students and as assistant headmaster before assuming the athletic directorship in 1981. His long tenure as AD was marked by quiet, steady leadership as he oversaw the department's growth from a program of ten sports, eight coaches, and a $100,000 budget to a program of 26 sports, 87 coaches, and a $600,000 budget. He introduced a parent board for the hockey club which became the model for all future club sports. He shepherded the upgrading of athletic facilities including the completion of an on-campus baseball field, tennis courts, weight-training room, the renovation of Sachs Stadium, and the construction of the new gym. One notes with pride the five IHSA championships which came during his tenure, but unseen and unnoticed was the day-to-day minutiae of a burgeoning athletic program which Bill handled with characteristic grace. Bill Graf not only participated in Loyola's fortunes but moreso committed himself to her cause.
Back