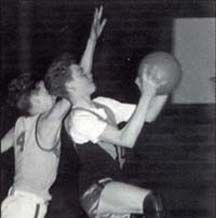 Burt Dolan was one of Loyola's finest basketball players from the World War II era. As a junior, Burt and Hall of Famer Johnny Dee, coached by Hicks Connelly, led Loyola's cagers to the Catholic League North title and a showdown with Leo in the Catholic League Championship. They lost in a close game, but Burt was selected for the All-Catholic League team for this fine play and leadership. In his senior year, Burt captained the squad and received further accolades. He was named to the All Tournament Team at the big St. George Tournament, and was again an All-Catholic league selection. An all-around athlete, Burt also played football, starting at right halfback in his senior year. Burt moved on to play at the College of the Holy Cross until his career was interrupted by service in World War II. Returning for the 1947-48 season he helped the Crusaders, who were the defending NCAA champions, to another final four appearance. They also won the Sugar Bowl Tournament. His backcourt mate on that team was Bob Cousy.
Back