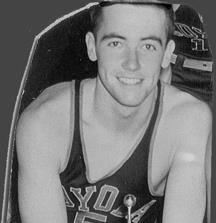 He played in the era of satin shorts and high-top sneakers, the age of the two-handed set-shot, the running one-hander, and the passing game. For the schoolboy cagers of the late 40s, the world may have changed, but the game had not. Fundamental basketball was still king, and at Dumbach Hall one of its finest practitioners was Patrick J. "Packy" Cullinan. Perhaps Loyola's first great player in the post-war period, Pat proved himself one of the top hardcourt men in the city before heading east to greater glory at John Carroll University. Most important, he did so with uncompromising integrity and an unselfish dedication to the corporate mission. A scrappy, intense competitor, Pat could handle any position on the floor, and often did. Standing just under 6'1" and possessing all the skills necessary to be a top-flight guard, Pat was more often pressed into service at the forward or center positions for a Rambler team long on determination but short on height. Deft with the dribble and pass, active on the boards, and tenacious on defense, Pat played with an unrelenting drive to succeed. A three-year varsity starter, he was among the top scorers in the Catholic League, parlaying soft, two-handed set-shots and driving lay-ups to produce double-digit scoring efforts. As the senior captain of the 1948-49 squad, Pat led the Ramblers to the title game in the prestigious Catholic League Holiday Tournament, hosted annually by St. George High School. Loyola defeated St. Rita in the final, with Pat earning selection to the All-Tournament team. At season's end, he was named All-Catholic League North (First Team), All-Catholic League (First Team), and All-Chicago Area (Second Team), and closed his splendid prep career with a berth in the annual Catholic League All-Star Game. An all around athlete, Pat was also a three-year letterman in track and field, taking the CCL pole vault titles in both 1948 and 1949. Upon graduation, Pat was recruited to play basketball at John Carroll University, where he once again distinguished himself with his full-court play at the guard position. Still the big gun and playmaker on offense and a relentless ball-hawk on defense, Pat earned three varsity letters for the Blue Streaks. He ended his career with the honor of captaining the squad in his final campaign. After earning his degree from John Carroll, Pat entered the business world. For 37 years he worked for Hallmark Cards, from which he retired as vice-president of sales development.
Back