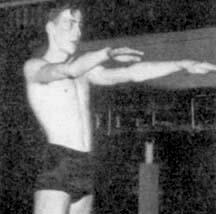 First as a competitor and then as a coach, Arnold N. Cajet distinguished himself as one of the foremost figures in the history of Illinois diving. A fiercely competitive athlete for whom losing was anathema, Arnie avenged the second place showing of his sophomore season by capturing the Chicago Catholic League diving title in successive years, 1951 and 1952. He simply dominated midwest A.A.U. diving competitions during a time when Catholic schools were unable to compete in the IHSA championship. Arnie went undefeated for two years in meets that included the state champions of Illinois, Iowa, Wisconsin, Minnesota, and Ohio. A four-year varsity letterman at the University of Illinois, Arnie was a finalist in the Big Ten diving championships of 1954, 55, and 56, and in the NCAA diving championship of 1955, where he finished 8th and 11th in the one and three meter events. His athletic days ended, Arnie turned to a brilliant coaching career. In 1957, Arnie became Loyola's first swimming and diving coach at the Wilmette campus, and quickly established his credentials by bringing Loyola to within five points of a Catholic League championship against powerhouse Fenwick. In 1959 he began a thirty-six year run as the diving coach at New Trier, an extraordinary tenure that produced 33 All-American divers and seven IHSA champions. His honors are numerous. He was named Illinois Diving Coach of the Year in both 1976 and 1982, and was inducted into the Illinois Diving Hall of Fame in 1982 and the Illinois Swimming Coaches' Hall of Fame in 1994. He was recently selected to receive the National Interscholastic Swimming Coaches' Association's Hall of Fame Award for 2002. He served as the NISCA Diving chair for eleven years and the All-American Diving chair for twenty years.
Back