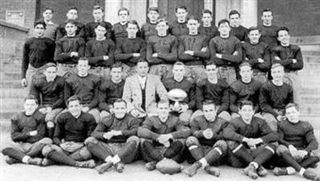 The Loyola Football Team of 1933 was an historic team, certainly worthy to take its place alongside the six or eight truly great teams in Loyola's ninety-three years of football. The 1933 season was one of expectation and fulfillment, controversy and triumph, confusion and, finally, clarity. Loyola's Maroon and Gold would conclude one of the greatest stretches in its history, with its fourth Catholic League title in nine years. Loyola's championship run was led by legendary coach Lenny Sachs (Hall of Fame, 1985) and his punishing All-Catholic League, All-State captain Jack McCarthy (Hall of Fame, 1985). Loyola employed a power offense and a stifling defense to roll through an undefeated season, one of only four in Rambler history. The final record of 8-0-2 included six shutouts, third on the all-time list as Loyola outscored its opponents 159-30 en route to an East Section and then a Chicago Catholic League championship. But, due to controversy off the field, the claim to the title itself would be in doubt before it was all over. Loyola began its season with three consecutive shut-out victories over non-League opponents. Their fourth shut-out victory in a row was against St. Rita, their first East Section opponent. But then the Loyola march was temporarily stalled as the Ramblers tied Mt. Carmel, the previous year's champions, to a 6-6 tie. Loyola's next two games, with DeLaSalle and St. George, were entered in the win column. The Leo game ended in another tie, 12-12, but the final regular season game against DePaul resulted in a 12-0 Loyola victory, giving the Maroon and Gold the East Section Championship and the right to meet the West Section Champion, Fenwick. Earlier in the season Mt. Carmel had to forfeit an East Section game to St. Rita because the Caravan had played an ineligible player (a fact pointed out by none other than Loyola's coach, Lenny Sachs). This meant that, even with two ties, Loyola was the East Section Champion. But just before the Maroon and Gold were to play Fenwick for the Catholic League Championship in Soldier Field (the first of many appearances for Loyola in "the big house"), Bishop Shield, the founder of the CYO, thought up the idea of a benefit game for his youth organization. He invited Mt. Carmel and St. Rita to replay the game that had originally ended in a forfeit. Undaunted by this turn of events, Loyola and Fenwick went ahead and played each other in Soldier Field for the Catholic League title, with Loyola emerging the 13-0 victor and champions once again. After the title game, Mt. Carmel played St. Rita in the benefit game and defeated the Mustangs. Not only did they then declare themselves East Section Champions (instead of Loyola) but, when Fenwick refused to play another title game, the Caravan decided they were also Champions of the entire Catholic League. In the eyes of objective observers, confusion and doubt and pretense did not reign long. With its sterling 8-0-2 record, Loyola laid rightful claim to the Catholic League title, as evidenced by the team picture showing Captain Jack McCarthy with the championship trophy in his grip.
Back