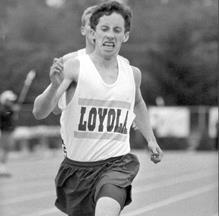 There remains a series of enduring images from a career as brilliant as that of Terence D. Brennan: two All-State selections, an armload of Catholic League titles, a string of record-setting runs. And that is only from high school. His collegiate photo album glitters with even greater accomplishment. The record is, indeed, steeped in the memorable. In any conversation regarding the greatest runners in Loyola Academy history, Terry Brennan without question occupies a central place. Coupling elite endurance strength with an unflinching work ethic, gritty determination, and tactical intelligence, Terry blazed his own trail in distance running, rewriting the Rambler record-book before taking his game to new heights at the collegiate level. Even as a fifteen-year-old freshman, Terry ran from the front and never looked back. Through his first two track campaigns, he had already taken back-to-back titles in the CCL 1600-meter run, and qualified for the state finals. His decision in the summer before his junior year to forgo a promising soccer career (he started as a midfielder for the 1999 CCL champions), thus committing to cross country and a full-time running program, paid off in spades. In 1997, in his final competition in a Loyola uniform, he stood on the podium at the IHSA State Track championship meet, a fifth-place medal in the 1600-meter draped about his neck, a new school record in his grasp, and his All-State status secure. Terry could look back on a prep career replete with individual achievement: seven CCL titles in track and cross county; a sectional title in the 1600-meter run; four trips to the state finals; All-League, All-Area, and All-State designations in both sports; school records shattered in the 1600-meters, both indoor (4:22) and outdoor (4:18.6); a CCL Lawless Award in cross country; and two Most Valuable awards. Thereafter, he launched an All-Everything career with the Blue Devils of Duke University in cross country and track, sealing his reputation as one of the finest distance runners ever produced by the Academy. His record in cross country alone makes his case: All-ACC (1999, 2000), All-East (1998, 1999), NCAA All-Regional (1997, 1998, 1999, 2000), Academic All-ACC (1997, 1998, 1999, 2000). He qualified for the NCAA Championships in both 1998 and 2000. In his senior season, in which he repeated as team Most Valuable, he placed third in the ACC championship while captaining Duke to the team title, its first in 23 years. Two weeks later, Terry took first at the NCAA Southeast Regional and was subsequently named its Athlete of the Year. In track, the 2001 team captain concentrated on the 5000-meter run and the distance medley relay. He was twice named Duke's Most Valuable Distance Runner (2000, 2001) while earning six All-ACC selections and four more Academic All-ACC berths (1998, 1999, 2000, and 2001). Perhaps Terry's greatest honor in a sterling running career came in 2003, when a select committee of coaches, former runners, and writers named him to the ACC's All-Time Cross Country team and designated him one of the fifty greatest distance runners in Atlantic Coast Conference history. Terry earned a B.A. from Duke in 2001 and a J.D. from Northwestern in 2006.
Back