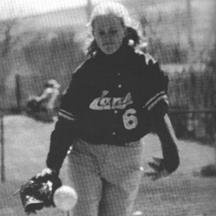 A dominant performer on the mound and at the plate, Maral A.Binnebose wreaked havoc on the best-laid plans of opposing managers and teams. As a two-time captain and two-time MVP, she led successive Rambler nines deep into the state playoffs, directing the 1997 team to the Sweet Sixteen before capping her prep career in 1998 with a trip to the Elite Eight. Driven and focused, Maral coupled competitive intensity with a sheer love of the game, inspiring her team with purpose each time she stepped onto the field. Maral was the consummate all-around player, earning three-time All-Conference and three-time All-Area recognition while lettering in each of her four years. She was a force to be reckoned with in each half of the inning, dictating play whenever and wherever she was on the field. The southpaw's devotion to the craft of pitching and her mastery of the fast-pitch repertoireÑparticularly the dropball pitchÑmade for an intimidating presence on the mound. Hours of studying and honing her pitching skills paid off in victories (60 wins out of 83 decisions), strikeouts (545 career), and a miniscule ERA (1.11 career average, .85 in her last three seasons). Maral was equally imposing in the batter's box, where her offensive array confused and challenged opposing defenses. A lefty powerhouse, she employed the full arsenal at her disposalÑhit, bunt, slap, and power slapÑto produce an impressive .373 career batting average (.400 in her last three seasons). In her senior campaign she led the Ramblers in batting average (.440), hits (40), RBIs (21), and slugging percentage (.725). Maral was twice named Chicago Tribune Athlete of the Week, and closed her prep career with selection to the "Super 60" team of the nation's top seniors. Maral took her game to the University of Illinois-Chicago, where she established herself in the Flames' pitching rotation in 2000 and 2001 after a rookie season as a reliever. In those two seasons she posted a 14-9 record with a stingy 1.7 ERA, at one point stringing together six straight wins that included a one-hitter and a four-hitter. Maral and the 1999 softball team (co-holders of the NCAA record for victories in a season) were honored recently with induction into the UIC Hall of Fame.
Back