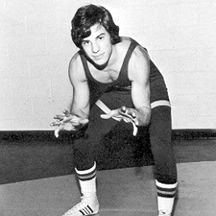 Better late than never. When John F. Amari decided to try out for Loyola's wrestling team in the late fall of his junior year, he knew next to nothing about the sport. In only two seasons of competitive wrestling, John carved out a sterling record of 64-1-1 and a reputation as one of the finest and fiercest grapplers in the Chicago area. Cat-like quickness, peerless balance, and tremendous base strength and agility gave John the upper hand in every encounter. Though a newcomer to the sport, John discovered that seven years of serious judo training provided a powerful set of skills for use in his encounters on the mats. His particular forte was the takedown, and with it he attacked opponents mercilessly. A driven and focused competitor, John brought an intimidating intensity to the fight. His relatively brief but brilliant career began in stunning fashion. Taking the stage in his first major competition as an uncertain 105-pound rookie still learning his craft, John was pitted against defending league champion Steve Bonner of Mendel. Three periods later, John had out-pointed the champ and had launched a Hall of Fame career. He rolled through the rest of the slate relatively unscathed, his only blemishes a close loss and a tie during a three-day stretch and avenged the following week in swift and brutal fashion with two first-period pins against the same opponents. He never lost again. A Chicago Catholic League title and the CCL Outstanding Wrestler Award concluded an impressive first season and prepared the stage for his final campaign. Carrying a glittering 30-1-1 resume into his senior season of 1972-73, John dominated Loyola's dual and invitational schedule with ruthless, surgical precision. Now wrestling at 112 pounds, he fought his way to a perfect 33-0 mark, closing out a luminous career with his successful defense of his CCL title and his second straight CCL Outstanding Wrestler Award, all despite throwing out his left shoulder in mid-season. Over the course of his two seasons of competitive wrestling, John captured ten straight invitational titles and ten straight Outstanding Wrestler awards. After graduation from Loyola, John attended Western Illinois University, earning a degree in business administration.
Back