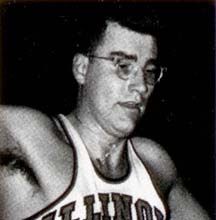 George H. Bon Salle is arguably Loyola's best basketball player ever. Prolific scorer, defensive enforcer, adroit passer, and rebounding presence, the 6'9" Bon Salle choreographed basketball's shift from a guard-oriented to a low-post game. After a brilliant senior season in which he led his Rambler team to the 1953 Catholic League North Section Championship, George captured All-Catholic League and All-City honors. The Big Ten came calling, and George settled on the University of Illinois where, in his final year, he was named to the All-American team of 1957. George later plied his trade as the first round draft choice of the Denver Truckers of the National Industrial Basketball League under the late Johnny Dee. He played pro ball for five years. As a gold medal winner at the 1959 Pan-American Games and as an alternate to the 1960 U. S. Olympic team, George secured his place among Loyola's basketball elite. After graduation from Illinois, George matriculated to law school at both the University of Denver and NYU.
Back