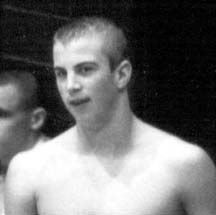 A swimmer of raw power and lightening quickness, Christopher W. Lutz was a force in the freestyle and backstroke sprints. Fiercely competitive, he fashioned a passion for winning and a natural gift for speed into a string of top-flight performances and championship titles. His pool prowness served him equally well in water polo, where he was preeminent in all phases of the game and emerged as one of the top players in Illinois and the nation. Physically imposing, with a body sculpted by Vulcan, Chris flexed his athletic muscle at virtually every important competition. He was simply overpowering in his two specialties, the 50-yard freestyle and the 100-yard backstoke. His individual record in those events tells a story of dominance: four Catholic League titles, five Sectional titles, two New Trier Relay titles, and five top seven finishes in the State finals. As a senior, he received the Tony Lawless Award as the Chicago Catholic League's outstanding swimmer, and was named Tribune Prep Athlete of the Week. Chris was no less impressive as a top scoring water polo player. He was named to the 1986 All-State Water Polo First Team, and was one of seventy players in the nation selected to attend the U.S. Junior Water Polo Development Camp at the Olympic Training Center. Chris was selected captain of both the swimming and water polo teams in his senior year, and responded by guiding the swimmers to a 1986 Catholic League championship and the water polo netters to a second-place finish in the State finals. Opting not to foray into collegiate athletics, Chris secured a Bachelor's Degree in Communication Studies (with a minor in Business) at the University of Iowa.
Back